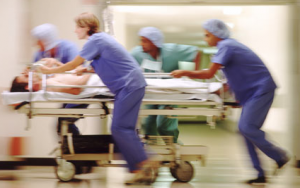 A new survey from the American College of Emergency Physicians found that emergency physicians have experienced a 46 percent increase in patient intake since the Affordable Care Act took effect on Jan. 1. The study also showed that 23 percent reported a decrease in patient intake, while 27 percent said there had been no significant change.

Future predictions from the study’s respondents were swift and definitive: Eighty-six percent of today’s emergency physicians expect a “great” increase in the number of visits over the next three years. Meanwhile, 77 percent of these physicians believe their medical facilities are ill prepared for the projected influx of new and returning patients. Part of the recent increase had been expected all along. Given the fact that emergency-room use is covered under these insurance policies, many believed that a spike in patient traffic was inevitable.

A majority of emergency physicians expect the Affordable Care Act to have a negative impact on patient safety and quality, now that an estimated 8 million Americans have signed up for insurance under the law.

Many Americans who qualified for insurance coverage under the Medicaid program may find themselves out of luck: many primary care physicians no longer serve Medicaid patients.

When people are unable to book appointments with primary care physicians, they go elsewhere. Emergency departments are the next step for many. A number of health-policy experts believe that much of the increase could be alleviated by informing and educating patients about the wide range of healthcare choices available to them.